All villagers are welcome to join our AGM. As we have planned to conduct it by Zoom this may limit numbers so if you wish to sign in, please contact Kim Jones via info@edmonstonehall.co.uk as soon as possible. First come first served.
Our call to arms was very successful as we have two new members of the Management Committee.  Many thanks to Fiona Nicoll and Callum Roberts for volunteering as many hands make light work in the maintenance of these community facilities. The Hall has opened up as allowed by government guidance and we look forward to welcoming new customers and old friends alike.

The Edmonstone Hall is a village hall primarily serving the communities of Strathblane and Blanefield, but available for anyone to hire.

Built in 1926 by the Edmonstone Family of Duntreath, it was bequeathed to the villages of Blanefield and Strathblane for recreational use.  It is located in Blanefield, in the heart of the village, just off the main A81 road, and has parking space for approximately 25 cars surrounding it.

The Edmonstone Hall is a versatile space that can be used for many different types of events – from large events such as ceilidhs and concerts, to smaller gatherings such as lunch clubs and meetings.  It is run by a committee of volunteers who keep the Hall going in the interests of the local community.

Please do get in touch – we look forward to welcoming you! 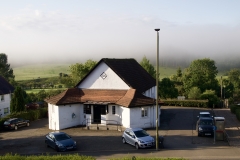 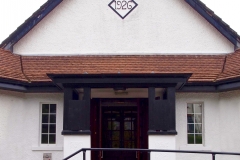